How do I begin to tell my story? To share messages from a life’s journey that I thought would be linear but that turned out to have more twists and turns than I ever expected? How do I share in a way that provides inspiration, hope, new perspectives on old ways of thinking and being? These are the thoughts spinning through my head as I sit to write my first blog post.

How do I start? I guess the best way would be with an introduction.

What do you think of when you’re asked to introduce yourself? My first instinct is to think of “who am I”? My second thought is wonder “who I am not?”

There is a yogic philosophy called Neti Neti, meaning “not this, not that.” It reveals that by recognizing more of who we are not, we see more of who we really are.

For my story, it’s easiest to start with some of the identities explaining “who I am.” I was born in California but moved to CO when I was four. When I was five, my parents divorced. Eventually, my dad moved back to Southern California. I grew up spending school years in CO with my mom and 2 sisters and my summers in Orange County with my dad. My senior year of high school, I moved out to live with my dad in California. This was a big change and a leap of faith. It turned out to be a great decision. I was so happy to be living in CA again and knew in my bones that living by the beach is where I call home. My first major identity formed. “I’m a California girl.” 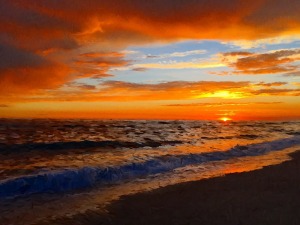 I went to college at UC San Diego. There I continued to grow and explore. I joined the

lacrosse team, trained for biathlons, & learned to surf. Identity #2 formed, “I am an athlete.” My junior year, I dislocated my shoulder playing lacrosse. That resulted in major reconstructive surgery and six months of physical therapy. That time helped me realize I wanted to get a graduate degree in physical therapy.

I knew I wanted to do something fun before I went to grad school. So, after college, I got a job at a resort in Guam. Guam is where I acquired identity #3. “I am an adventurer.” I packed all of my belongings into storage and took just 2 suitcases with me on the plane to Guam. After 20 hours of flying, I heard the pilot welcome us to Guam. I looked out the window and saw a tiny speck of land amid hundreds of miles of deep blue open ocean in the South Pacific.

A tiny voice in my head said, “what have I done?” Well, what I had done was open the

door to fun and adventure. I worked outside during the day; teaching windsurfing, diving or working at the swim-through aquarium and participating in dance shows at night. My time off was spent exploring the island, sailing, scuba diving, bungee jumping, caving and visiting the neighboring island of Saipan and going to South Korea.After an incredible six months on Guam, I left to backpack through Southeast Asia, Australia & New Zealand. During this time, Identity #4 was born. “I am a world traveler.”

I returned home to the States 1 year after I had left to attend grad school for physical therapy in Florida. The next 2 years were intense and stressful, integrating mountains of new information and working to accomplish all that was expected of me. During that time, I began to experience physiological changes; profound, unwavering fatigue, chronic injuries and abnormalities in routine lab work. The doctor said it was because I was under so much stress. I believed that and carried on, graduating at the top of my class. Identity #5 was born. “I am a physical therapist.”

After school, I moved back to CO and began practicing physical therapy. The physical ailments that had started in grad school continued, and I thought, “but I’m not stressed anymore.” So, I went to see a doctor.

A few days later, I received a phone call. At that moment, everything changed when I heard Identity #6.  “I have Lupus.” I was shocked! My mind tried to pull up anything I could remember learning about lupus when I was in physical therapy school. The details were a blur, but I remembered enough to know it is a life-altering and sometimes fatal autoimmune disease.

Within a year I ended up in the hospital fighting for my life. I could not eat, had fevers of 104 degrees & was in so much pain that I was on a morphine pump 24 hours a day.

Finally, the doctors understood that I was undergoing multi-organ failure as a result of lupus. The longer I lay in that hospital bed, the more the external world faded away. My identification to my physical body became almost obsolete.  Another identity began to slip away as I realized, “I am not this body”. After 2 surgeries and intense medication, that lupus flare began to subside. Finally, after almost a month in the hospital, I returned home to begin recuperating.

Eighteen months later, I was back in the hospital with multi-organ involvement. This time, even high doses of medication were not enough to stop the cycle of inward destruction. After three weeks in hospital isolation, my doctor talked to me about beginning a two-year protocol of chemotherapy to try and save my life. This was not something I wanted to do. But she sat on the edge of my bed and explained that if I chose not to start chemotherapy, I would be transferred to Hospice the next day. I was only 32 years old.

The first six months of chemo were a blur. Most days were spent sitting just trying to breathe. I was living the “not this, not that” of Neti Neti. I was too sick to read or watch tv or to really focus on anything. There was no travel, no school, no job, no sports. Nothing external to identify with.

Once the treatments finished, I began to get stronger. I took short walks, discovered yoga and meditation and spent time with friends. Later, I became a restorative yoga teacher.

Eventually, the call to move back to San Diego and live by the ocean became so intense I could not ignore it. I moved back and reclaimed my identity as a “California girl.”

As time continues, I find new hobbies and ways of being. New things to identify with. I’ve lost the identity of “athlete” and “physical therapist” and gained the identity of “yoga teacher,” “meditator.” Who knows what my further identities will be? “Writer”? “Speaker”?

Knowing all this, how do I properly introduce myself? I am not the identities that I’ve described above. Because they can be added or taken away. I am something more than my identities, the external descriptions I used to categorize myself. Think of a glass container where water can be added or taken away, yet the vessel remains the same. I am like that, like container itself.

I am what can hold everything or nothing. I am the piece that remains constant throughout each change, each new identity and event.  I am the witness, the essence within. I am simply that.

It’s nice to meet you.